Enzo Anselmo Ferrari was born on the 18th Febuary 1898 in Mondena, Italy. He was the youngest child of Alfredo and Adalgisa Ferrari, after his eldest brother Alfredo Junior. His father worked in a workshop fabricating metal parts at their family home. At just age 10 he witnessed Felice Nazzaro win at the 1908 Circuid di Bologna and this event is what inspired young Ferrari to become a race car driver.

After his family’s carpentry business collapsed, Ferrari went on to find a job in the car industry. Unable to get a job volunteering his services at FIAT in Turin he settled for a job as a test-driver for C.M.N. (Costruzioni Meccaniche Nazionali), a Milan based car manufacturer. He later went on to be promoted to race car driver and made his first competitive debut in 1919 at the Parma-Poggio di Berceto hillclimb race, he finished fourth place in the three-litre category.

In 1937 while working for Alfa Romeo, they decided to regain full control of their racing division which meant retaining Ferrari as sporting director. Unhappy with this, Ferrari left and founded Auto-Avio Costruzioni, a company supplying parts for other racing teams. Although a contact clause restricted him from racing or designing cars for 4 years. Despite this he managed to manufacture 2 cars for the 1940 Millie Miglia, driven by Alberto Ascari. Following the outbreak of World War 2 in 1943, Ferrari’s factory was made to undertake war production for Mussolini’s fascist government. Soon after an allied bombing of his factory Ferrari decided to relocate to Maranello and at the end of the war, Ferrari decided to start building his own cars with his own name and in 1947 he founded Ferrari S.P.A.

Ferrari started racing again and his teams open-wheeled debut took place in Turin in 1948 and his first win came later that year in Lago di Garda. His first major victory came when he entered the 1949 24 Hours of Le Mans with a Ferrari166M driven by Luigi Chinetti and Peter Mitchell-Thompson (Baron Selsdon of Scotland). In 1950 Ferrari enrolled in the newly-born Formula 1 World Championship and is the only team to remain present since its introduction.

By the end of the 1960s, with increasing financial difficulties and meeting new safety and clean air emission requirements for his production and development of road cars, Enzo Ferrari had to start looking for a new business partner. In 1969 Ferrari had to sell 50% of his company to fiat with the agreement of Ferrari having 100% control of racing activities and Fiat would pay a sizable subsidy until his death for use of his Maranello and Modena production plants. Following this agreement with Fiat, Ferrari stepped down as managing director of the road car division in 1971.

In 1981 Ferrari tried to revive his teams fortunes by switching to turbo engines, they showed great promise, however Gilles Villeneuve was killed in May and his team mate Didier Pironi had his career cut short after being in a violent end over end flip after hitting Renault of Alain Prost on the misty back straight at Hockenheim in August. The final race win for the Ferrari team that he saw was in 1987 before his death.

Enzo Ferrari died on 14th August 1988 in Maranello aged 90. His death was not made public until 2 days after, something Ferrari requested to compensate with the late registration of his birth (also wasn’t recorded until 2 days after due to snow storms). 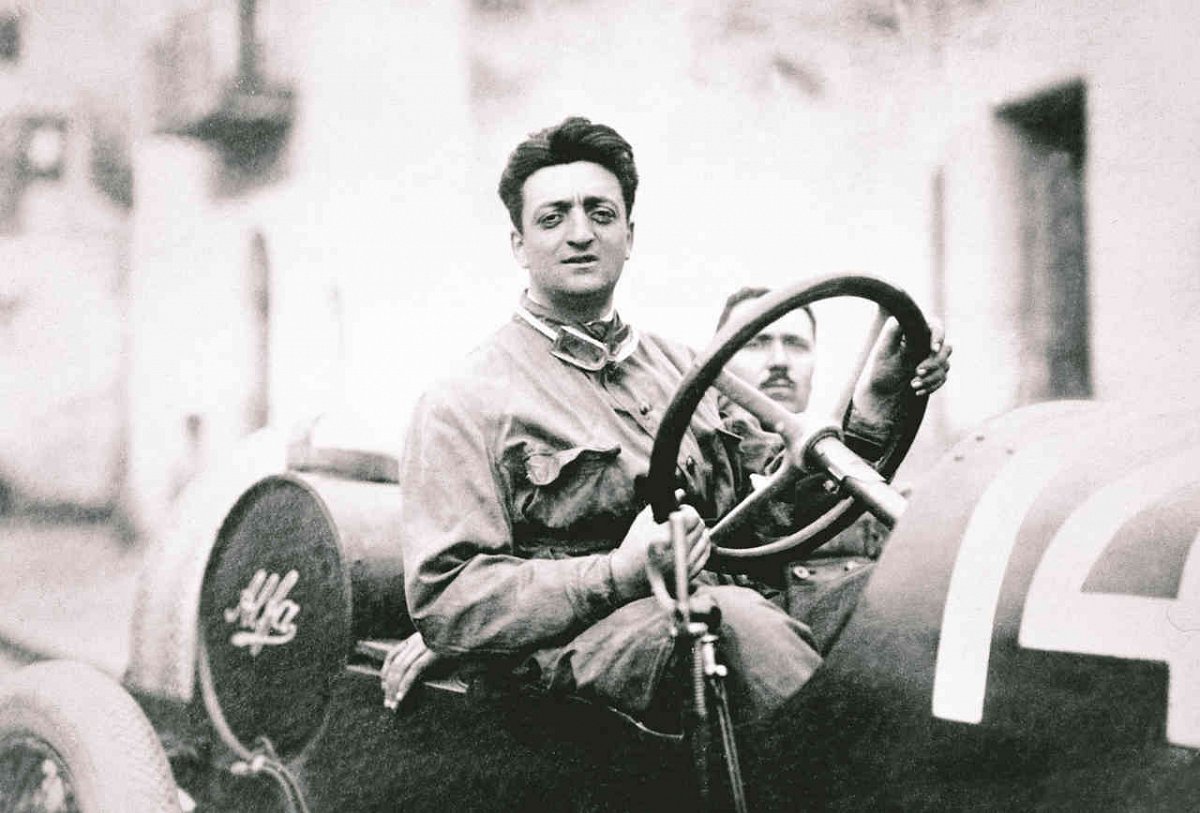